Rangmunch.TV brings in laughter and comedy to you all in form of Comedy Circus Ka Naya Daur “Uniform Special" to go on air on 21st August 2011. The all time favorite stress buster 'Comedy Circus Ka Naya Daur' has got something unique for its audience in the upcoming episode. So! What is unique this time? Yes! It is the theme of the episode 'Uniform Special'. So let us gear up to see how the Comedy Kings tickle the funny bones of the audience around the theme of this episode. 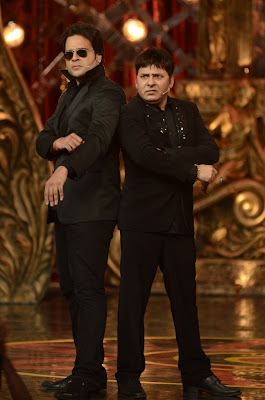 We will see Vishakha as a lady conductor and Mantra in various different avtaars, Ankita as a teacher and our favourite Kapil as a naughty student. This act gets standing ovation by Judge Archana Singh with her giving full marks to the contestants. Azhar and Priya entertain the audience with the act of a Pizza Delivery boy and an old corrupt woman who tries to exploit this boy. Bharti and Siddharth gave an entertaining act of a Policewoman who talks about her relationship with Superman. Judges couldn't stop laughing at this act as it was one of the best performance given by this pair. Mahi entertained the judges as a girl who gets fascinated about getting married and hence meets this Gay chef, whom she tries to impress. Our all time comedy Kings Krushana and Sudesh will be seen in a new avatar of Men in black. This performance gets them standing ovation by Judge Archana Singh and much wanted thundering claps.

Catch all these rib tickling acts in Comedy Circus Ka Naya Daur on Sunday at 9:00pm only on Sony TV.