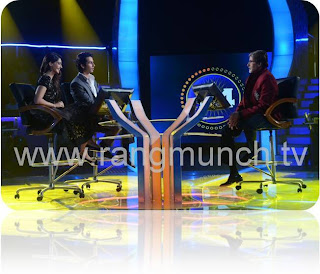 Tonight’s episode on Panch Koti Maha Money – Kaun Banega Corepati will witness a new chronicle altogether! Show host Mr. Bachchan will be joined by none other than the lovely damsel Sonam Kapoor who will be coupled along with her Mausam co – artist Shahid. The episode will be opened by Big B greeting all on the auspicious occasion of Ganesh Chaturthi and remembering Ganesh Bhagvan thereby opening yet another stirring episode of this season.
Both Sonam and Shahid will  be seen spreading their romantic vigor on the show taking charge of the hot seat with absolute confidence. Both settle on donating the prize money that they will win to Umeed – a charitable organization by Air force Officer’s Wife. Sonam and Shahid come will be seen promoting their upcoming flick ‘Mausam’. An all elated Sonam , will be all keyed up to take up the challenge that will come her way one by one from the legendary  Amitabh Bachchan. First time on the Hot seat , Sonam will be seen conversing with co participant Shahid , carefully choosing the answers of the questions thrown at both of them.  Not just this, both will urge all present to watch their new movie ‘Mausam’ and will be seen reciting a dialogue from their movie.
All this and more, only on Kaun Banega Corepati on 1st September 2011 at 20: 30 hours only on Sony Entertainment Television.
Edited by:
Niharika Vidya Sagar
Rangmunch.TV