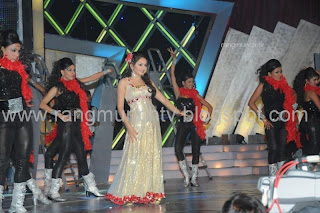 It has always been seen in the past that it is a stage performance during events and awards functions that brings out a brand you avtaar of the actors, as opposed to the the characters they play in the show. The BIG TELEVISION AWARDS that is going on air on STAR Plus is no exception. It is here that you are going to witness that side of some of your favorite stars that you have never seen before.
While the TV debutants Rucha, Soumya, Shaheer, Archana gave the audience an all-time high, it was Gopi bahu aka Jiaa Manek who stole the glam light for the evening. The on-screen, traditional and coy, bahu performed on a very sexy number, Daaarlinggg, leaving the audience craving for more. This for sure comes as a welcome treat to fans and viewers who have otherwise seen Gia dressed as a saree clad bahu of the Modi household.
The actress moved and grooved so well that most of people in the audience were infact taken aback!
Well mark this date on your reminder list right away so that you don’t miss the Ooomph factor displayed by your Gopi vahu from STAR Plus’ super hit show Saath Nibhana Saathiya.
Catch Gopi from Saathiya groove to Daaarlinggg only on BIG Television Awards Sunday, 21st August, at 7 pm only on STAR Plus!