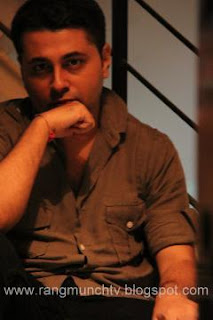 Writer Gautam Hedge has many hit shows to his credit. If you are hard core romantic and love watching the leads falling in love and look forward to their moments together, then there is no way you haven't watched Gautam's shows. Lets kill your curiosity and tell you a little more about this writer. Miley Jab Hum Tum, Santaan, Love Ne Mila Di Jodi, Geet Hui Sabse Parayi have all had Gautam's contribution in them.

He is currently working on three shows Saath Nibhaana Saathiya, Iss Pyaar ko kya naam doon?  and Sapno se bhare Naina on Star Plus as the screenplay writer. Despite his busy working schedule, he made it a point to write back to us as he had promised us an interview.


As we read, we became audience ourselves, and totally enjoyed the interview. I hope you will too!


1. The promos say “Gopi ab padhne chali and you are given a time period to build a certain track. As  screenplay writer what are the elements that you would add from your side?

From a broad story POV, it was always decided that Gopi will always get educated. When the time came to start it, the entire creative team had a channel meeting on how we have to take this track ahead. As a screenplay writer, one has to make sure the story writer’s idea gets fleshed out and flows well in the episode, with the right amount of graphing, in terms of movement, emotion and growth.
2. As the screenplay writer can you tell us, one particular scene/sequence you have added in the recent few episodes, that wasn't in the original story that was handed to you, but you felt would add  value in the story.
Me and my co writer Jyoti Tandon always work on the stories and try squeezing in an odd romantic moment between Ahem and Gopi- or even a Gopi moment with Kanha ji. The beauty of Gopi lies in her innocence. Her vulnerability, her faith, her positivity makes you feel for her. When that meets Ahem’s tough guy act, it gives us a moment that brings a smile.
3.  Do you feel sandwiched between a story and a dialogue writer as you think you might have  a very limited scope to improvise? How much % of what you write gets translated on screen?
Ha ha ha! Not at all. We don’t feel sandwiched. With Saathiya, the execution always adds chaar chaand to what one has written, sometimes surprising us, because they take it one step ahead.

4.  Iss Pyaar ko kya naam doon, as opposed to Saathiya has the makings of an intense love story. How do you ensure through your writing that there is latent chemistry between the leads though there is not much of direct interaction between the two?
The fun in IPK is that even when they are not together, they are still together, in each other’s thoughts. And when they are together, they don’t want to be together. Its that I hate you (like I Love You) phase right now. It’s the most exciting phase of romance I feel.
5. Women hate to love Arnav and his coldness, while writing his scenes, how do you know what to write for Arnav? How do you balance between making him look brutal yet vulnerable?
Arnav has a troubled past that has made him what he is. He has become cold to people who are not a part of his world or his ideologies. If you see how much he cares for his didi, you feel he is such a sweetheart. he may say he cares a damn but he is always affected- he cares for his plants... he is fond of gardening. He is like those plants, they cant express themselves, but they still have a life. They are just like him- he cant express freely. Also, we are lucky to have gotten Barun to play ASR. His eyes are superbly intense.
6. As a person how much do you believe in the phrase “Nafrat paas aane na de, Mohabbat door jaane na de "
Totally. It’s so romantic. Imagine being attracted to someone whose face you don’t want to see. You cant get that person off your head. Worse, such opposites, she’s full of life, he’s reserved, she believes in God, he is an atheist, she loves jalebis, he is a diabetic. Aah, I love them more again!

7. What is that you like about the character of Khushi? How do you get into the skin of a female character while being a male writing scenes?
Khushi started getting more and more clearer as we kept writing her. She is so full of life. It was Gul (producer Gul Khan)’s idea that she cooks when she is stressed. She is someone who is scared, but still musters courage because she knows Devi Maiyya is with her. She is so clumsy and ends up goofing around. She is not miss perfect. I liked these 2 lines the dialogue writer Hitesh Kewalya wrote- Di, ek jawaab ke saath do sawaal mere liye muft kyun aate hai/ and har problem pe Khushi Kumari Gupta ka naam kyun likha hota hai...’ I think that pretty much sums up how she is. Our darling Chamkeeli!
8. How different is writing a Starplus show from that of writing a StarOne show?
On Star One, when I wrote for Miley Jab Hum Tum and Love Ne Mila Di Jodi, the audience wss primarily young. on Star Plus, the catered age group is wider. There are young and old ones both. So, our drama cant be all yuppie and it cannot only be candy floss romance. We need to have family drama too.
9. Would you write a scene, if you are personally not convinced with the way its being executed? Has it ever happened that you have pictured a scene in a particular way in your head but the outcome has been totally the opposite ( this could mean good or bad)
I have been pleasantly surprised with IPK a lot of times recently with their execution. On the dialogue level and on the set, the creative team- Megha, Anand, Gul- add a lot of nuances that take it a notch up. To answer the first part of your question, while writing if I have my doubts, I always clarify and we come up with a solution that’s mutually agreed upon.
10. Do you read fan-fiction story on the various fan sites ? Would parallel stories running in the minds of fans and on the web alter your thinking process if you were to come across them? If it does, would you incorporate that into a storyline?
I haven’t read these, so wouldn’t be able to comment on this one.
11. A fun question, If Modi household was Hogwarts, Ahem Harry, and Gopi Hermoine, in a hypothetical situation, how would you make them fall in love for a day?
If Ahem is Harry, Gopi cant be Hermoine na? Hermonie kit oh Ron ki hai :P So Jigar will be Ron, Hermoine will be Rashi, Koki will be Voldmort and Gopi will be Ginny! Hang on, I will have to discuss this question with Ms Rowling and get back to you! Until next time...