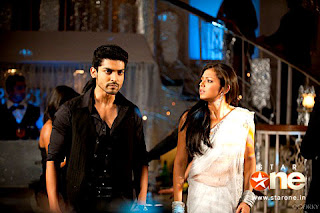 ....So the dance sequence happened, and i fell asleep while watching the show last night ... and had to watch it again this morning.. so at this one point in the song, where maan and geet do this little KH meets Mahi mahi meets mast kalandar ditto ditto ditto steps ... you see Maan walking forward and Geet standing at the back crying while Maan has an angry disturbed look on his face. The look disturbed me, so i gladly used  my tata sky pause and play option to my convenience and froze the screen !! Cos at that moment there was so much untold story coming from Maan's face and his expressions...

At about 1.50 look at the pained look on his face, you will know what i mean, and then when it is complimented with lines like ...
meri nazar toh
tumpe pare toh
man me tha tera sedhai
betabion ko
rahat mili toh
dhoor hui meri tanhai
mere rang ka
tere roop ka
hai aasar tere surroor ka
mere haal se
mere dard se
tu hai bekhabar
Going a little backward, you see how Maan is reluctant to dance, but starts to only after seeing tears in Geet's eyes and compliments her in the entire dance? When was the last time Maan did that ?  Do you remember the behne de time when she had asked him to dance, and he had refused, but had done it as he watched her dance, there after he had danced when she was missing her mayke waaley, and the dances that came later came from the MSK who was a changed man... But the Maan we see now irrespective of the ML, is someone who doesnt believe in this kind of naach gaana, but he did it ...
Lavu my friend and i were talking this morning about this, and we both agreed to the fact that ...
Maan knows Geet is his wife: FACT 1
Maan is drawn to Geet: FACT 2
Maan sucks at expressing himself: FACT 3
In the given scenario, it is not his love or his attraction for her that makes the entire scenario sad... it is his mental state ... For whatever reasons if you saw 1:50, Maan says ... "mere haal se mere dard se tu hai bekhabar" where its clear that the whole world can see Geet and her tears but no one see's his inner turmoil .. of him having turned into a loner ...
His entire family supports Geet
His entire family knows he has lost his memory, but wants it to come back.
Everyone is playing pranks to make sure Maan and Geet get together ...
Amidst all this, everyone misses to see, that its not Maan's fault that he has been pushed to the corner where only he gets to deal with whatever he is going through. If he has really lost his memory he is wondering how to deal with his attraction towards this woman who claims to be his wife, but the gentleman in him refuses to take advantage of the fact just cos they are tied down by marriage! he is once again living and learning the emotions that he had gone through a year ago ...!!  Everyone has been supportive to the extent that they know he has forgotten his past .. but the effect of not being able to recollect how the last one year went where he fell in love, got married, met with an accident, saw changes in his work place is something that this poor man is unable to fathom !!!
Even if this were to be looked at in another scenario where its not his memory thats lost, we also know Maan alone knows why he is doing what he is doing. If he has gotten NT back into the house, he definitely has bigger plans in store .. If he wants Geet to stand up for herself as 4lee says he knows he will have to put her through these hard times .. lastly, to be insanely in love with a woman and to pose like you dont care when you are totally drawn to her, want to be around her, embrace her and love ... is perhaps the hardest thing for Maan to deal with at the moment ...
Either ways it does make our heart go out to this man, and hence take their story forward in which ever way it takes !!Let fate be the decider, but Maan Singh Khurana for sure in the entire deal has lost out on a lot ... and i think, fate stops playing games with him and either restores his lost memory or things happen in a way that reveal why he has had to put himself through this period of self torture!!
Have a nice day!!
Niharika Vidya Sagar